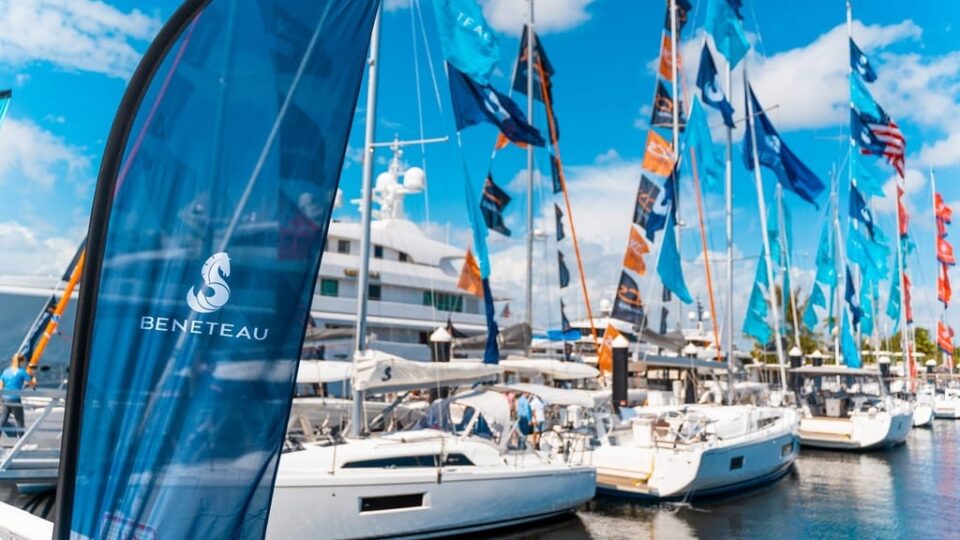 I want to start this article by saying that both Beneteau and Jeanneau produce fine boats built to high standards, and you can’t go wrong either way. However, in today’s article, we will take a closer look at both brands to determine each’s pros and cons and hopefully help you make up your mind when purchasing one.

Beneteau offers a wide range of sailing boats in various sizes, from small boats such as the First 14 to bigger ones like the Oceanis Yacht 62. In their production line, there are power boats as well as sailboats ideal for both leisure boating and sports events. Beneteau is a reputable brand to be reckoned with as far as international boating standards are concerned. Their boats have won famous international races such as Fastnet, Sydney Hobart, and the Middle Sea Race.

The Beneteau group acquired Jeanneau in 1995, so Beneteau and Jeanneau boats are essentially the same brand with some differences in how the two of them do things. Jeanneau produces luxurious and timeless boats by architects with a world-class reputation between 33 feet (like the Sun Odyssey 349) and 64 feet (like the Jeanneau 64). Their boats are famous for their comfort, sportiness, and sheer luxury. Jeanneau is famous for making their customers’ comfort a top priority, and personally, I like the timeless design.

According to my personal experience, an interview that I did with a boat surveyor and an online independent boat owners review group, there have been subtle choices of the Jeanneau newer models having a stronger build than the previous Beneteau boats. This is because the Jeanneau’s hull is built using the glassed-in stringers and floors and won’t come unglued. On the other hand, Beneteau has a dropped in moulded pan model. The glassed-in grid system is superior to the glued-in liner system.

Besides that and a few other variations on different architectural approaches, the overall built quality is typically the same, and many of their boats are even produced in the same factories.

Beneteau boats are often made for charter and the family market, with design towards more roomy interiors and bigger, more comfortable cabins and galley. This means more storage in the cabins and roomier bathrooms. Jeanneau boats, however, perform better as cruisers. They point well, do not often creak and slam, and are lovely sailors that ride well with the wind. The keels are robust, and these features culminate to make them better under sail. Still, even though their interior has enough space and provides comfort, they come second to the Beneteau in that aspect.

Jeanneau has promised and delivered its customers on an international scale peace of mind concerning their cherished Jeanneau boats. With an extended general warranty which was moved up from 2 years to 3 years, customers can boldly cruise wherever on earth and never need to worry if the part they are sailing in voids their warranty or not. They have a 5-year blister warranty on hull blistering thanks to the new material resin they now use as a barrier coat. The 7-year warranty covers all Jeanneau boats’ structure exclusively, which means that all deck and hull repairs with regards to manufacturing defects as recognized by technical services are covered under this 7-year warranty package. What’s so much more is that this 7-5-3 warranty is transferable upon the boat’s resale to future owners. So, the Jeanneau warranty can still cover a second-hand buyer, which helps with the resale of your boat.

The Beneteau group parts and labor warranty for replacing any defective parts as detected by professional technicians in the department is offered. This will last for 3 years following the delivery of your purchased boat. Then similarly to Jeanneau, they also offer a 7-year structural warranty that will cover the expenses of any fault that is deemed by your dealer’s diagnosis to be the manufacturer’s fault. This period of 7 years starts counting following the purchase of a new boat from any authorized retail outlets.

Beneteau first did architectural work with an outsider in 1975. This collaboration produced the First 30, and since then, Beneteau crafts have been boats to reckon with at sea. Today Beneteau continues to partner with seasoned architects to make the best naval crafts. These architects go to great lengths to make real innovative stuff. Some of these well-known architects and their companies are Pierangelo Andreani of ANDREANI DESIGN, a designer and an architect; Jean Berret & Olivier Racoupeau of BERRET-RACOUPEAU DESIGN; Robert Biscontini of BISCONTINI YACHT DESIGN, who doubles as a Naval architect and a designer. These renowned companies and men have been and are behind the architectural structure and design of Beneteau crafts.

Jeanneau has worked out something similar to the Beneteau in line with their design department. Their boats are distinguished by their elegance, with constant innovation drawn in by the crème-de-la-crème in the naval architecture niche. Together with the well-tempered execution of the Jeanneau project teams, these designs help to achieve the attractive and easy to handle boats they are well-known for. Some of their architectural designers include Daniel Andrieu of ANDRIEU YACHT DESIGN; Vittorio Garroni, CEO of GARRONI DESIGN; Marc Lombard of MARC LOMBARD DESIGN; and Andrew Winch of WINCH DESIGN.

Beneteau’s revolutionary Dock & Go System is a kind innovation in the boating world that eliminates the worry of manually maneuvering your watercraft into a dock and providing a solution to the cumbersome task of having to handle your boat in close quarters. The new Beneteau boats come with a joystick that synchronizes a pivoting saildrive base and bow thruster. The Dock & Go system combines the engine’s assistance and bow thruster to give the same thrust both astern and ahead. It is also compatible with feathering/folding propellers, which helps optimize a yacht’s thrust for all-around maneuverability.

Jeanneau partnered with the ZF Marine Industries group to create a similar Dock & Go System, one which allows a joystick to direct the boat to whichever direction within a 360 degrees angle just with the push of a button. They named this system the 360⁰ docking, a name culled from the directions. This system can move the boat at the desired speed for an easy and fulfilled experience. Subsequent models of boats were released after the innovation came fully equipped with it.

As for building materials, the Beneteau group uses resin and balsa core to build their hull. Balsa core is a sandwich laminated between the inner and outer fiberglass material. This balsa core permits resin quantity reduction in each hull constituent while still maintaining the desired structural strength. Resin constituent reduction in the hull means lighter weight and better sailing. It can also make the boat go faster. Balsa core is infamous for high resistance, noise reduction, and insulation. Wood for their boats is reportedly purchased from only certified and controlled sources who cut with the good of the ecosystem at heart. Alpi Wood seems to be their favorite choice, and why wouldn’t it be? Alpi Wood perfectly suits timber for marine products and is definitely a renewable resource.

Jeanneau makes their modern monohull using the vacuum resin infusion molding technique, and they also use something similar when they make the deck. This is implemented to control weight and also to create a quality finish. No wonder Jeanneau boat owners always have some scintillating (no matter how subtle or little) to say about their boats finishing. They have also been making use of fiberglass to make their hulls since 1958 and because this material is just as -if not more- reliable as wood which has been the preferred choice of building material.

They use this fiberglass technology known as an infusion to make hulls for bigger boats. Infusion is where they lay up dry fiberglass cloth in the mold and enclose it in a vacuum with a plastic film. Then they pour the resin to seep in and seed the entire cloth. The result is an overall weight reduction and optimization of the resin quantity to increase the strength and resistance of each piece produced.

Much, yet not enough, has been said about these two innovative boat brands, and this is because there are so many good things to say about both Beneteau and Jeanneau. Because both brands are basically the same company, many similarities have arisen in the course of our comparison. Not to worry, though, because both brands are constant award winners in races and yearly awards and what is more important is that their owners are the proudest to own them.

Personally, although I believe that Beneteau boats are nice and comfortable and sail reasonably well, Jeanneau boats are better as they feel and sail like proper sailboats. Jeanneau boats point well, sail better and don’t creek as much or slam as hard. Also, keel fittings feel more robust and feel better-built all around.

Pro Tip: If you are torn between buying a Jeanneau or a Beneteau sailboat but are unsure which one you should go for, then I strongly suggest that you charter each of the boats for at least a week. That way, you will find out which boat fits your needs better and which one you like better. That way, you can avoid making an expensive mistake.

Peter is the editor of Better Sailing. He has sailed for countless hours and has maintained his own boats and sailboats for years. After years of trial and error, he decided to start this website to share the knowledge. 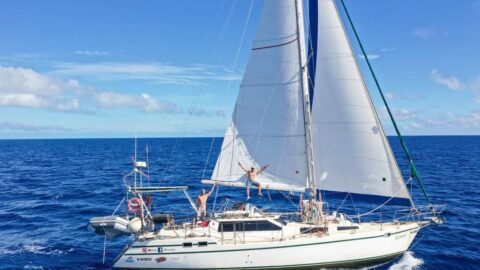 What are the Best Sailboat Rigs? 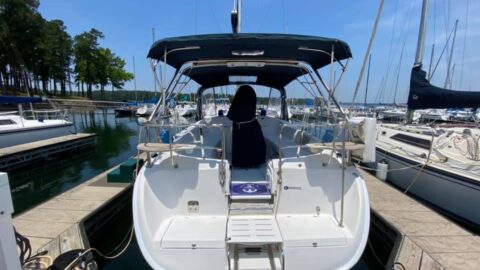 What is a Bimini on a Sailboat? And Why You Should Install One

Jib Vs Genoa: What is the Difference? 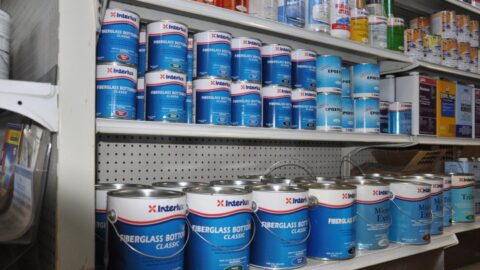